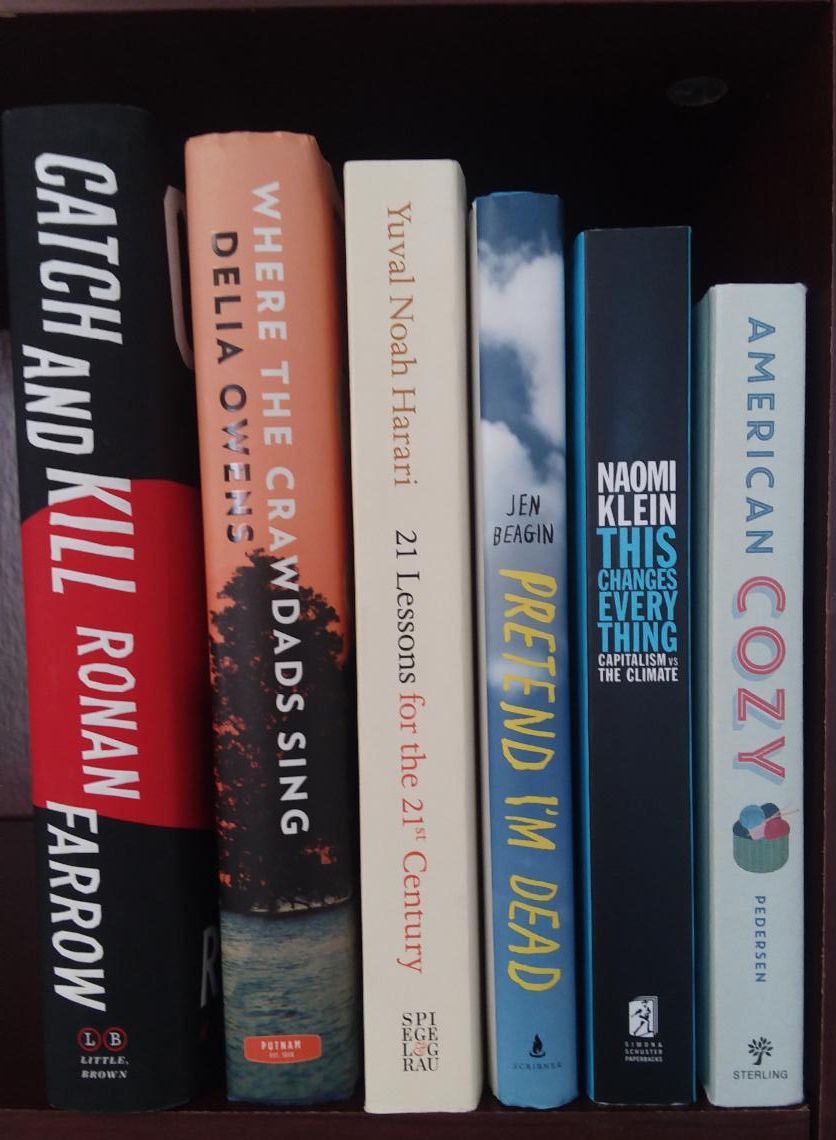 Below are six non-business books I read pre-Coronavirus that might provide a cure for boredom as you lock down in place.

American Cozy by Stephanie Pedersen – If there’s ever been a more appropriate time to make your home more comfortable, do tell. I’d never heard of hygge (pron. hyoo-guh), the Danish practice of blanketing a dwelling in contentment and well-being, until my daughter gave me Pedersen’s colorful, helpful guide. It fits well with the whole Marie Kondo decluttering rage and will have you ever prepped for germ free pop-ins come… 2022?
21 Lessons for the 21st Century by Yuval Noah Harari – Surely Dr. Harari is working on an updated & revised edition to include Prep for Plague, but until then we have the 2018 bestseller through which he thoughtfully instructs on community, humility, justice, meaning, etc. Perfect for anyone who appreciates the connected essay format and wants to broaden their horizons on just what’s expected of Earth’s inhabitants in the coming decades.
Catch and Kill by Ronan Farrow – Investigative reporter Farrow’s 400+ page pursuit of predators is entirely gripping. He’s careful to credit #MeToo victims as the story’s heroes in exposing scumbags Weinstein, Lauer, et al., but the author was stalked and threatened along the way. If the dismantling of entertainment industry pigs will help distract you from constant Covid-19 updates, have at it. Hopefully it’s available on the reading cart on Harvey’s wing at Rikers.
Where the Crawdads Sing by Delia Owens – So-so ending aside, this is one beautiful debut novel. Wildlife scientist Owens spins the tale of Kya Clark, the misunderstood subject presumed guilty of murder by her fellow North Carolinians. You’re transported shin-deep into the marsh mid-20th century alongside this practical orphan, with all the sights, sounds, and bugs the mind can conjure. Think of it as an engrossing mystery that’ll help steer you from clobbering your fellow shut-ins.
Pretend I’m Dead by Jen Beagin – Pitch black comedy to brighten your day during a spiraling health crisis. Beagin leverages her years cleaning houses to give us Mona and let’s just say you’d install security cameras throughout before leaving her alone to tidy up your place. Among a parade of nuthouse characters in New Mexico, Mona navigates the drab day-to-day in part to distance herself from an ugly upbringing. Beagin’s writing is on par with the great Diablo Cody.
This Changes Everything by Naomi Klein – Brilliant and just brutal, this took me a couple months to read. Wrapping your head around climate chaos is best done in morsels; indeed, at one point my wife nervously suggested I shelve it for a time. No matter. Klein’s masterpiece is crucial to appreciate the insanity and insatiable greed among “the fossil fuel companies [that] have every intention of pushing the planet past the boiling point.” Ugh.
[Ed. note: Maybe hold off on Klein’s book until the curve flattens and your neighbors’ run on guns subsides. We all have enough to process right now. Good health and many thanks for always reading along.]