Book Report – The One Thing by Gary Keller with Jay Papasan 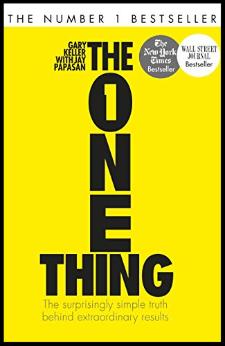 Gary Keller would’ve been horrified if he witnessed me prepare this review. You see, his bestseller The One Thing admonishes we hyper-focus by eliminating distractions and zeroing in on our most crucial activity (singular), but during several attempts to pick and choose from some 20 sections I’d flagged, there were texts pinging, phones ringing, stock tickers dinging, and Verizon sales reps slinging, with yours truly winging away. No irony was lost as I worked on distilling the essence of this 225-page paperback down to a few paragraphs, taking probably three times longer than it should have because of – as the Grinch would say – all the noise noise noise noise noise. With no Whos down in Whoville to blame, I applied Keller’s advice and merely time-blocked: a couple quiet, early morning hours set aside to knock this assignment out. That it took so long to recognize I’d been doing the exact opposite of a just-read-and-revisited book’s theme was, shall we say, illuminating.

The book abounds with takeaways, some serving as “yeah, no shit, Sherlock” reminders with other parts much fresher. Sure, you know you’ve got to work on saying no to stuff that in weak moments you’ve agreed to (and then kicked yourself repeatedly), and as outlined under the clever heading Much To-Do About Nothing it’s suggested we stop with all the box-checking busy work and keep a far shorter “should do” list. Done. What gives the reader pause is this Keller challenge: “What’s the one thing I can do such that everything else will be easier or unnecessary?” Drink that in. Can you answer it? Odds are the survey says… BZZZZT! Most of us don’t know how to address what is called The Focusing Question, but Jerry Seinfeld does. The comedian’s “one thing” is to write jokes every single day. He keeps an old school wall calendar and once the funny stuff goes from his head to the page, he gets to draw a big red X through that day’s square. Seinfeld can then take a cruise in one of his sports cars or write more jokes, but the obsessive pattern is this: never break the chain. “The system is designed to bring your biggest goal to the now and simply focus on making the next X.” Got it?

From there, we’re on to asking a subsequent big & specific question then finding a great answer. An example of the former is, “What can I do to double sales in six months?” What makes the book compelling is the author’s credibility for such loftiness: as cofounder & chairman of Keller Williams Realty International, you know he’s moved some inventory and helped coach countless others to go and do likewise. The answer is then chunked as Doable, Stretch, and Possibility with not much need for elaboration here outside of stressing the clear mission of barrier breaking. “Highly successful people choose to live at the outer levels of achievement,” it says in Chapter 12. “They not only dream of but deeply crave what is beyond their natural grasp.” As painful as it is to turn off Matty in the Morning and CNBC, and to put the phone way over there, Keller has forced me to rethink productivity and to commit that come hell or high water this well-defined particular thing will happen without fail every working day. May Santa bring us all an ample supply of red Sharpies.