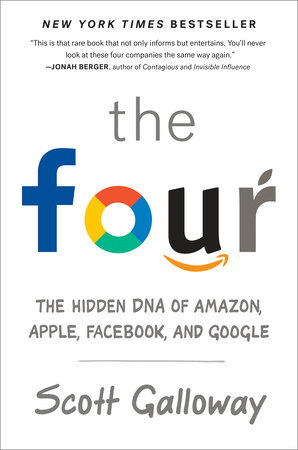 “Look at the list of the ten largest firms in Silicon Valley for each decade of the last sixty years,” writes Scott Galloway in the 2017 book The Four. “It’s a rare firm that makes the list twice.” Faltering corporations aside, there’s a good chance that in the last few hours (or minutes?) you’ve ordered something on Amazon, peeked at an Apple device, rolled your eyes at a cloying Facebook update, and Googled something. It’s these titular companies – and others lurking in the wings in hopes of joining their ubiquitous ranks – that the author explores, including the forces which could eventually render one or all irrelevant. Galloway is a cocky, f-bomb dropping writer who does have keen, colorful insights on these tech empires. Unfortunately, he comes off like a bit of a dick, peacocking his way across eleven chapters and 270 pages. The reader is left a bit empty with the image of the NYU Stern School of Business professor in midlife crisis, trying desperately to impress his MBA students and those would-be founders who come sniffing around for his approval, advice, and seed capital.

Galloway has founded nine firms from which he’s enjoyed several successful exits, so he’s a credible source and likely beyond measuring his self-worth by how well he can coin a phrase or be seen as the cool kid in this his first book. Bold statements are made throughout: no pure e-commerce company will survive long term; Facebook knows you better than your real friends do; it’s the brick & mortar stores, not the iPhone, that made Apple what it is; we don’t care how huge Google gets because we trust our intimate experience with it. He sees them encroaching on each other’s territories in everything from capturing more advertising to winning the autonomous vehicle race. “While the other three companies, the alpha lions on the veldt of high-tech competition, still face the prospect of an early demise,” he opines, “only Apple has the potential to cheat death.” It has to do with the luxury market and Apple’s deep moats and if you need to look up the definition of veldt, that makes two of us. Or more, actually. While, as the author reveals, about one of every six Google queries is original, this one had been asked before – hello, auto-fill – likely by someone who already read the book.

Who’s next in line, what he calls The Fifth Horseman? Galloway’s potentials include Tesla & Uber, both of which lose gobs of money and have beyond ugly balance sheets, and Walmart & Microsoft, the former for aping Amazon so well and the latter with its valuable recurring revenue streams from stakes in the enterprise marketplace and plaything LinkedIn. Of course, he admits it’s possible the next huge thing doesn’t even exist yet, that “someone is working on a new technology that will turn the digital world upside down – just as the transistor did in 1947.” Nobody knows and the reader is left to decide if this is a question worth pondering. Companies this gigantic unfairly compete, avoid taxes, and invade privacy on the path to amassing obscene profits. Tackling how this plays out in the coming decade(s) feels pretty daunting. Besides, Godzilla: King of the Monsters just hit the multiplexes. We could always just go to the lobby and have ourselves a snack.

2 comments for “Book Report – The Four by Scott Galloway”