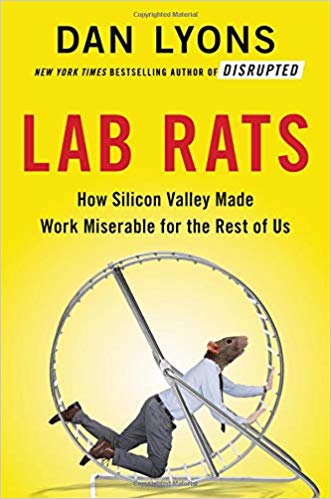 “Our brains are wired to deal with stress that is intense but brief,” writes Dan Lyons in his latest book, Lab Rats, “like escaping from a predator or fleeing from a burning building.” When the predator is your boss who’s prone to a daily torching of the office cube farm, your brain has serious issues. Following up the side-splitting Disrupted with a sobering 230+ page examination of systemic unhappiness in the workplace was a bit of a left turn and fans of the author’s crackerjack humor will find it’s used rather sparingly here. Sure, he could probably build a hit sitcom themed around widespread drought or the measles outbreak, but the funny cover/pessimistic tone is in the end a welcome bait-and-switch. That fear of impending irrelevance – whether founded or otherwise – drives skittish CEOs to bet big on flavor-of-the-month strategic initiatives and nutty cultural pivots is a sickening reality at start-ups and the Blue Chips alike. Ain’t much funny in that.

In the book’s opening chapters, Lyons navigates us through what he calls the misery in the maze. Workers of all ages have developed unhealthy levels of angst stemming from trendy programs like Agile and Holocracy and here’s hoping these are new terms to you and not some hellish job site reality. Unproven as they are, these theories  are designed to shake up the workday through “scrums” and “sprints” and “kanbans” – whatever the hell those are – and along with learning this newspeak you may even be asked to sign a constitution purporting somehow that nobody and everybody has power at work. Heady stuff, right? In Part 2, Lyons outlines the four factors that drive worker unhappiness: money, insecurity, change, and dehumanization. Broad summary: real income has declined and layoffs loom while frenzies ensue and folks are treated more and more like the machines that will one day replace them. It’s gloomy and as the fog begins to clear we’re left to conclude along with the author that “maybe it is all just sleight of hand, a form of corporate misdirection.” Yeah, the pension fund is bare but at least the fridge isn’t. We’ve got snacks, people!

Mercifully, Lyons turns upbeat with stories from progressive companies like Basecamp. Once known as 37signals back when its co-founders published the fabulous Rework (my glowing 2014 review of which can be found here), this Chicago software firm just gets it. They’ve developed a collaborative environment populated by cool, motivated staff with limited emailing & meetings during flexible, reasonable work hours. Basecamp is hyper focused and wildly profitable and has zero interest in being Apple (which somehow hit $1 trillion in market capitalization the day I typed this very sentence). The reader is treated to visions of what’s possible when company leaders master the basics of treating people well. While tech bros bitch about having to hoverboard their way around San Francisco’s burgeoning homeless population, some firms are running counter to the popular “we’re a team, not a family” movement that seemingly gives a pass to executives who blindside employees with rapid change followed by layoffs. Lyons celebrates those companies that treat staff as a team and family. Call that corny if you must; just bear in mind that constant stress can cause employees to act like rats in cages. Unless your company is called Rats R Us – an actual thing, in Florida, of course – it may be wise to take heed.