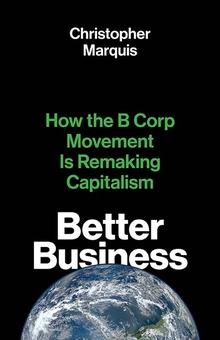 “The B Corp movement,” writes Christopher Marquis in his vital new book Better Business, “is one in which businesses recognize that they can only truly thrive when they benefit everyone who is affected by their operations.” It was started in earnest about 15 years ago by three Stanford buddies who put remarkable business careers on hold to – corny as this may sound – figure a way for companies to make not only a profit but also a positive impact on their employees, communities, and the environment. Certification spawned benefit corporations which are legally bound to deliver for all stakeholders, literally doing business for good. Napkin math helps us realize typical targeted GDP growth is not sustainable for Mother Earth and transparent corporate accountability for ceasing the horrendous practice of externality exploitation (of air! water! humans!) is the answer. Marquis gets pretty deep in the weeds, but it quickly becomes clear to the reader why younger generations are so willing to pay a premium for sustainably made goods.

The cynic in you understandably thinks at its core this is just corporate three-card monte, that savvy marketers know how to “greenwash” the issue through woke ad campaigns designed more to shift units than fix workplace calamities. And naturally the spoils of brand loyalty will always be a central goal to organizations both large and small with missions rooted in sustainability. But getting certified in doing right by society first builds the sort of credibility that eventually enhances sales & profitability and supports the notion of being best in – and for – the world. According to the author, “Propelling the movement forward requires consumers to understand that their choices can provide support for a new model of sustainable capitalism that creates higher-quality jobs, improves the quality of life, and preserves our natural environment.” While he doesn’t say “and makes fat cat execs that much plumper,” in the end that’s okay because – unlike the typical, insatiable CEO sent by central casting – they’re also mindful of others.

On that front, the best parts of the book are the tales of B Corps building inclusive, supportive cultures. Take Greyston Bakery in Yonkers, NY where anyone can apply for a job, including the homeless, recovering addicts, and the formerly incarcerated, and be placed as soon as there’s an opening. Or Burlington, VT’s Rhino Foods whose staff is nearly one-third comprised of refugees from all over the globe and which leads on-site ESL courses. Rhino has also partnered with an area credit union whereby employees in need can borrow money which is then repaid through payroll deductions, all the while developing a banking relationship and building good credit. Marquis gets to the soul of the movement and demonstrates the ripple effects yet to be realized as participants improve the assessment process and pressure others in their universe to get on board. There’s not much more cloying than a tech bro claiming he’s trying to change the world; in the case of these swarming B’s, that platitude feels genuine.

← Book Report – How I Built This by Guy Raz
Hands Off: Why We Should Stop Shaking Already →
Login
0 Comments
Inline Feedbacks
View all comments