Book Report – How I Built This by Guy Raz 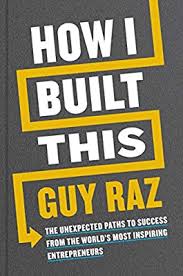 Herein a single nugget from each chapter in Guy Raz’s How I Built This:

Raz’s Afterword includes an inspirational piece about how people who love you – not unlike those Peloton’s Foley appealed to – want to see you succeed. My two cents: get even more motivated by those who’d just as soon have you fail out of pure jealousy that you even had the nerve to try. Here’s to the naysayers driving us all to new heights.

I don’t know how you do it. Your reviews become more noteworthy with each edition. Thanks for what you do.

John, I’m deeply flattered by your kind commentary. I hope the new venture is going great guns. Thank you!