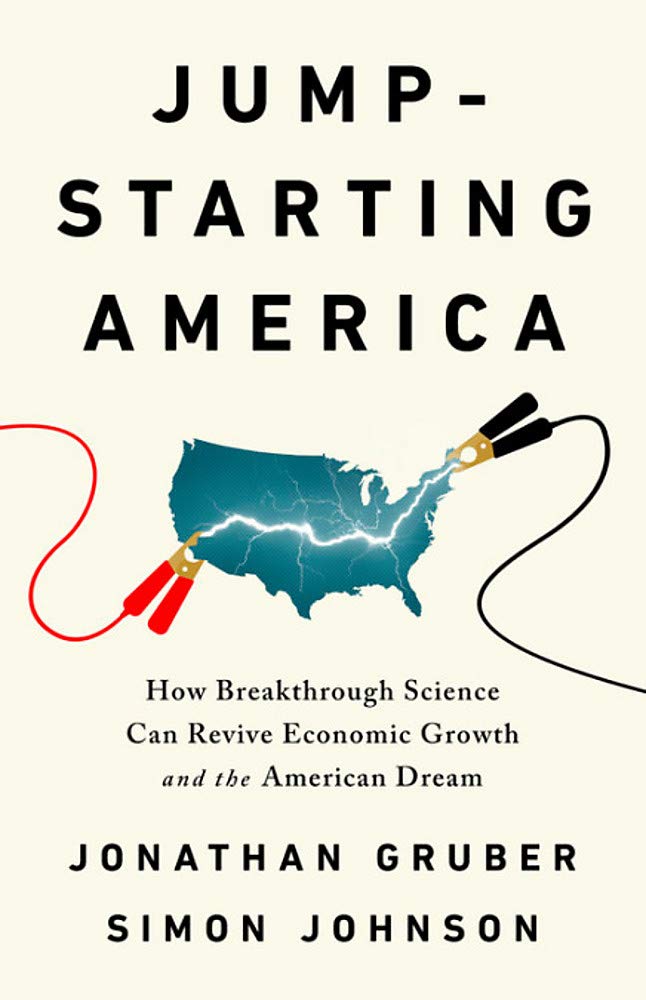 They don’t make ’em like that anymore. Now there’s a statement that typically generates one of two reactions: either an “Okay, Boomer” eye-roll or a constructive debate. In Jump-Starting America, co-authors (and fellow MIT economics professors) Jonathan Gruber & Simon Johnson instruct on how the post-World War II collaboration between the federal government, universities, and the private business sector sparked economic growth for the benefit of society in celebration of the greater good. The book is packed with evidence of the good ol’ bipartisan days when the White House – whether Democratic or Republican – and Congress knew how to synthesize such missions. “Almost every major innovation in this era relied in an important way on federal government support along the chain of its development,” they write. And while they deliver with sensible ideas on how to modernize the model to generate growth that’ll be “impressive” – a word they use about a dozen too many times, but that’s a nitpick – in 100+ regions across the continental US, also included is this dire warning: other nations are eating our lunch by leveraging American history. Swell.

The authors make plain that scientists lack the political clout they enjoyed a generation or two ago (not that we haven’t seen plenty of evidence of that, say, this year). The erosion of trust is explained by exaggerated postwar expectations, conflicts arising between politicians and scientists, and a rabid anti-tax movement. As a percent of GDP, the federal government invests in research & development only about one-third of what it did in the mid-1960s and naturally innovation is the primary victim. There are two challenges to fix here, namely spillovers and free-riders. The former discourages companies from conducting expensive R&D for fear that the latter will simply hitch a profitable ride on its coattails. Relying on venture capital firms to pick up the slack is folly because they are “focused on fast-impact industries, such as information technology, and not generally on long-run and capital-intensive investments like clean energy or new cell and gene therapies,” not to mention their unhealthy concentration of operations on the coasts. The feds can and should help create innovation hubs West of Kendall Square stopping just short of Silicon Valley.

The book maps out dozens of cities (or clusters thereof) that could become the next zones of economic growth. It would help if we could break the pattern of states getting sucked into cutthroat competitions in dubious attempts to lure companies with aggressive tax breaks, none of which does the nation as a whole any good. One of the more remarkable revelations outlined by Gruber & Johnson is a study of Texas that “found that about 85 – 90% of projects that collected a major state tax break were going to locate in the state anyway.” Furthermore, they propose public ownership of land, starting by taking advantage of underutilized federal buildings to house new research labs and offices or by promoting land swap arrangements between federal & local governments and universities, citing a successful example involving MIT. Their point: what’s worked in Cambridge can again from Toledo to Tuscaloosa, Tulsa to Tucson. And no, it won’t be easy but nothing worth doing is. Ain’t that America?

← Stand Back and Stand By: Election Day Six-Point Plan
Book Report – How I Built This by Guy Raz →
Login
0 Comments
Inline Feedbacks
View all comments