Hands Off: Why We Should Stop Shaking Already 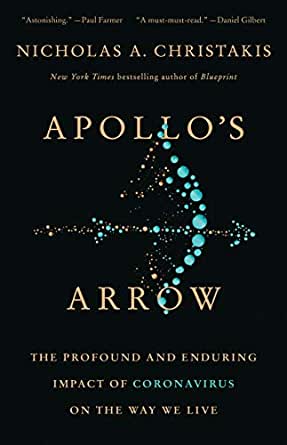 Nicholas A. Christakis sends a clear message in his important new book Apollo’s Arrow: human behavior must continuously evolve, lest we fall prey to calamities like disease. At the risk of oversimplifying a brilliant man’s work, in summary we ought to leverage cumulative culture (“the accumulated wealth of knowledge that belongs to humanity”) and enact new ways to outwit coronaviruses that might otherwise lead to a pandemic like COVID-19. As Christakis stresses, progress is not found in boneheaded corporate reactions like offering your meatpacking crew bonuses to show up onto a jammed assembly line as a virus rages communitywide; nay, it is represented in the thoughtfulness of clever ways to socially distance, making germs less likely to leap from person to person. He writes: “What is needed in order to confront a pandemic is solidarity and a collective will for disease control.” Kindly indulge me: then shouldn’t we be done with the handshake already? Other than meeting the demand for the obligatory “deal!” photo found on nearly every B2B website (in my industry, anyway), is it so important to revert to the ol’ grab n’ pump? I vote no but before deciding, please consider its origins and intended purpose.*

Perhaps the earliest form of the handshake dates to ancient Babylonia whereby a king would grasp the stony hand of chief deity Marduk’s statue in the annual ceremony of re-upping his authority. Grounded in the fear of not wanting to piss off any gods, the gesture survived centuries – finding its way into the works of Michelangelo and Homer – symbolizing the show of good faith in making promises. The extension of an empty, open right hand and subsequent pumping was meant to show a lack of hostility and no weapons up one’s sleeve. In the more recent past, Quakers adopted the custom as a display of equality between parties. In Western society, the handshake became the default way to establish trust and to greet, release, congratulate, celebrate, and thank another… and naturally share festering bacteria. We’re supposed to learn something about the way folks shake hands, mainly from the firmness of their grip. I for one would care a lot less if someone were to offer up a “dead fish” than whether or not they scrub up after skinning fish. Surely there’s a more hygienic way to engage fellow humans.

Change is of course hard. Confession: I’ve shaken seven hands during the pandemic, although zero in the past six months (weird brag). In the first half of the year of living dangerously, I was part of three meetings where guests, um, insisted on flesh pressing. The middle schooler in me – ever fearful of not fitting in – stupidly reared its head… and germy right hand. (Anyone else raised Catholic knows it’s mere muscle memory to not only receive an extended paw but lob an “and also with you” as well.) It dawned on me that this is a form of adult peer pressure. As kids, we shoplifted, lit spray paint behind the garage, and threw balls at moving cars because our friends egged us on and it was a pure rush. (Deny it all you want – we know what you did.) But as supposed grown-ups, sometimes we lack the fortitude to do what’s best because we feel silly being different, standing out, looking as if we’re trying to make a political statement in an otherwise innocuous refusal. Christakis instructs that it’s the glad-handing popular people who are society’s super-spreaders. Time to grow up, evolve, and spare the majority-service economy more crippling retractions. Next we meet, maybe toss me a wave or one of those knowing nods. Let’s leave our germs out of it, ya?

I am going to be a man and shake a man’s hand when it is offered to me and will offer my hand as well. I cannot wait for the current nonsense to be over – networking online, drinking online….Time’s up for back to business. At same time time, washing hands and wearing a mask if you are sick should be just as second nature as shaking man’s hand.

Mark, I appreciate you weighing in and respect your opinion. Hope you’ve read the other comments here… and carry hand sanitizer with you at all times! Stay well.

Wow, interesting history and point of view, Chris! I think we should stop the custom. There are better ways that we can acknowledge people – excellent eye contact, a smile, a good head nod. Throughout my day, I have to acknowledge many and have found that positive facial expressions, and a good head nod along with approachable eye contact, confirm sincerity. Expressions are NOT really lost with the mask – the eyes speak volumes to me. I can see sincere smiles, even with a mask, on many students’ & colleagues’ faces!

Same here, Janet! Thanks for offering a professor’s perspective. You’re getting a nice nod next time I see you. 🙂

I have often thought this custom to be outdated and uncomfortable for many reasons. The blessing that COVID has brought to us is the possibility of making this gesture the anomaly, not the norm. I will not be returning to this practice. For those I feel close enough to press flesh, I will give a hug. Everyone else will get a warm smile and words of gratitude for our meeting. The weapon we need to worry about today isn’t up their sleeve, it’s on their hand.

Karen, I’m with you on the warm smile and have been working on mine. And really appreciate your closing comment – well said!

A few years ago, I saw a video of people entering a meeting room and french kissing one-another. The voice-over said they had just exchanged fewer pathogens than had they shaken hands. That stuck with me and I have worried about hand-shaking ever since.
Unfortunately, the french-kissing alternative seems not to be catching on.

Ha! Can’t say I’ve ever seen such a greeting at any meeting, like EVER, Scott. One wonders where that video was shot… Paris? 🙂

Thanks again Chris for the insightful book and commentary. There is more behind a handshake than simply “flesh pressing” and that doesn’t go out of date. There is for that moment much that is learned about an individual. Eye contact is only one and head tipping doesn’t do it. For years at social events I typically wouldn’t eat “finger food” if I am shaking many hands. I didn’t need a pandemic to remind me how I was raised (wash your hands?). I’ll respect those in a meeting or social engagmement who wish to not shake, but I’ll gladly continue the tradition.

Fair enough, Ken. And as a finger food junkie… well, you’ve just given me a new perspective on that. Thanks – I think!

Chris, I was under the impression that at one time handshaking was a sign that you were unarmed. Don’t know where I heard that. Just another useless bit of knowledge I carry. Like the Battle of Hastings was October 14, 1066!! Keep up the good reads, Chris. Hope you are well.

BTW, I have a very hard time not shaking hands, but have cut back drastically. “Hi, my name is Bob and I and a handsahker. It has been two months since my last handshake.”