Systems vs. People: What’s Your Priority? 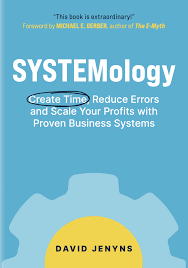 “The goal is to get your business to a point where there is no single-person dependency and you’re well-positioned to leverage every opportunity that comes your way.” One may say that’s easier said than done and author David Jenyns would agree. But wait, there’s more: he lays out a methodical, point-by-point reorientation plan in SYSTEMology, just out in paperback and with the potential to have a substantial impact on any small business owner/operator who’s serious about managed growth. Jenyns hammers the fact that a typical company is over-levered on its owner(s) and perhaps one other staffer, with the ranks otherwise populated by nice enough sheep grazing about with no true stake in how things operate. Yes, fancy new ideas will be met with plenty of resistance – more on that below – and Lord knows Bob in finance sure as shit doesn’t wanna change, but as the best Sandler trainers advise, this is the career you’ve chosen to feed your family so let’s get real or let’s not play. Something like that.

We are called to order immediately in the Introduction with a list of nascent-types for whom the book is not intended, focusing rather on those with “a good foundation who [have] achieved some level of traction.” (Jenyns wears his Gino Wickman and Michael Gerber on his sleeve to good effect, building on well-loved Traction and The E-Myth Revisited concepts.) As crucial as his outlined seven stages are, each with its own molehill components, one must start with basic self-awareness: we’ve likely – subconsciously or otherwise – trained staff to over-rely on us, knights in shining armor who must be called upon to solve myriad crises. The more this happens, the “better” we get at problem solving and ’round and ’round we go. The answer is the development of systems destined to become “your library of solutions to common business problems, no matter what business you’re working in or on.” Jenyns is good at doling out credit where it’s due: to Melissa Crowhurst, his implementer and eventual successor, and guests on the podcast he produced expressly to learn from experts in solving the very problems he was facing as founder of his Melbourne-based SEO agency. Clever, ingenious stuff.

The book stages us from Define, Assign, Extract, and Organize, and we look ahead to Scale and Optimize, but it’s Part 5 (Integrate) that especially grabbed me in addressing internal resistance head on. A plan for change without buy-in will be dead on arrival and we’re admonished to present its benefits on a customized basis to each team member, lest it be undermined by those “who either outright refuse to participate, procrastinate, and/or sabotage” the effort. Beware staffers who believe only they can execute a task; fret over exposure of their actual workload; or dig in – and flat-out – obstruct. Jenyns suggests a three-point plan to tackle this, including the willingness to cut folks loose. Non-confrontational managers may need some extra mirror time to get pumped up for this awkward, uncomfortable task but it’ll prove worthwhile in the end with a cross-trained, systems-oriented culture in which team members can enjoy more restful vacations knowing colleagues have their backs. Worst case you’ll expose an under-discussed problem: non-collaborative, secretive employees are often ripping the place off in more ways than one. At least fix that, ya?

← Hands Off: Why We Should Stop Shaking Already
Fan Mail for Jeff Bezos →