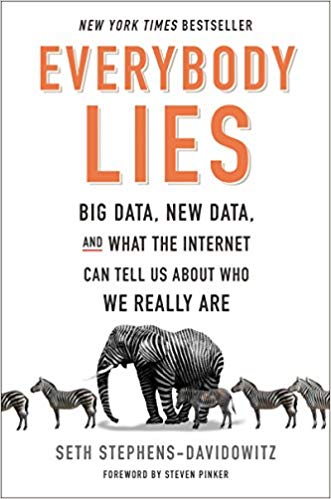 Surveys are fraught with inaccuracies. Take teens, for example. A meaningful percentage will falsely report themselves as adopted, claim to sport an artificial limb, be over seven feet tall, weigh more than 400 pounds, or have three children. Oh, you precocious scamps! So be wary of polls. A far better reflection of reality comes from aggregated Google searches and Seth Stephens-Davidowitz would know. The Harvard educated scientist used to work at the tech giant and has spent the past decade-plus carving up big data, captured in his bestseller Everybody Lies. “People lie,” he writes, “to friends, to surveys, to themselves” to paint a modified self-portrait but what they type in a search bar tends to reveal alarmingly clear evidence of their true selves. The book is best ingested in small bites and you may just find yourself stopping people in the street – something I literally did – to process the lessons found within. Think Bob in Accounts Payable is a bit off? You’re right. For inarguable proof, peek over his shoulder during coffee break web searches, when he types what he knows ought not be said aloud. Oh boy.

The author’s goal is to present a case both “illustrative and far-reaching” based on evidence “so rich you can visualize the people underneath it.” Mission accomplished. He walks the reader through data that’s new and honest and allows for causal experiments and zoom-ins on small subsets of people. Much of what is shared is Downy soft and sports-centered, like measuring the effectiveness of Super Bowl ads and discovering the key hidden factor in racehorse evaluations. (Get ready to wow at the next cocktail party or work event.) Alas, there’s the truly dark matter as well. Nate Silver, author of the terrific The Signal & the Noise (my 2014 review of which can be found here), claimed in no uncertain terms that Donald Trump wouldn’t win the presidential election but that prediction was so laughably 2016. What he and Stephens-Davidowitz have since discovered is so ugly and vile that it’s not only unprintable in this space it’s actually unspeakable in general. To learn about the secretly searched term that directly correlates with Trump support, you’ll have to read the book. It’s beyond hateful and a huge blow to the naive among us who figure as a society we’re a tad overdue for improved race relations.

Therein lies the rub – people are so damned secretive – and Google is built on the backs of its users’ surreptitiousness. Netflix is as well, or was at least when it was shipping DVDs. We learn that subscribers would pepper their queues with highbrow films but actually end up renting much more basic fare. Why would they claim to want to see that Merchant Ivory period piece but on Friday night end up sliding the latest Adam Sandler disc into the machine? Because they’re constantly sweating what the Joneses think of them and the contents of their mailboxes. Like schoolkids being called to the board, people are terrified of looking stupid or even different. Google of course is now so on top of information we crave that it completes the search language for us, revealing others’ common queries. Want insights into the state of marriage today? Google “I think my husband” or “I think my wife,” chuckle over what auto-fills, and then compare it against all your friends’ disingenuous social media posts. You’ll find a 55-gallon drum full of incongruence. Because everybody lies.

6 comments for “Book Report – Everybody Lies by Seth Stephens-Davidowitz”