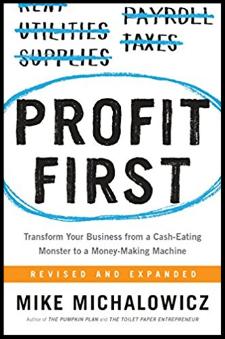 You know how roughly half of all new businesses fold within five years? Mike Michalowicz says they’re actually the lucky ones because it’s the survivor who gets stuck with a “scary, soul-sucking, cash-eating monster” to manage. In Profit First, his boat-rocking 2014 book that was reissued last year, the author warns us about the Survival Trap: watching bank balances dwindle as we race to cover every expense we’re mistakenly convinced is necessary, spiraling into debt by throwing good money after bad. Sound negative? Well, it is and yet a highlight here is the author’s self-deprecating admission of egomaniacal crash-and-burn recklessness that destroyed his prior companies. This serves perfectly his wise “do this/not that” style. Bonus: he’s funny as hell over these not-quite 200 pages, making it one of the more enjoyable tongue lashings you’ve ever gotten. Humor aside, this is the most important business book I’ve read this decade.

The Profit First religion boils down simply enough: Revenue – Profit = Expenses. Put another way, why bother even selling stuff if you can’t realize a healthy profit in the offing? There are paint-by-numbers steps to be taken, starting with opening five bank accounts into which you’ll automatically apportion a percentage of every deposit for income, profit, owner’s comp, tax, and operating expenses. If math makes you nervous, don’t let that serve as an excuse as we’re talking about simple stuff here. The most important step – even if you’re doing a daily doggy paddle through debt – is to earmark at least 1% for profit from each future deposit no matter what. Michalowicz built his system on modifying behaviors we already practice, one of which is (obsessively, anyone?) logging into bank accounts. You may not be comfortable reviewing balance sheets or expert in analyzing cash flow statements, but surely you know how much dough there is in the bank at any given time. With this method, you just have to set a benchmark for each of the specified accounts and possess a Three Bears mindset: determine if it’s too much, not enough, or just right.

“Your goal for now,” writes Michalowicz “is to get started immediately and decisively.” It’s not all number crunching, either. He is clearly a goofball who loves to celebrate, be it doing a spontaneous jig or kite surfing or taking life-changing quarterly distributions. And if you’re of the mind that the last one is too far out of reach, think again. Using this system, you will have at least a few extra shekels in the till and those are to be enjoyed without fail on something that will reward this new, healthy behavior of scraping something off the top for yourself. While enjoying those spoils – anything from a nice dinner out to the dream five-star vacation – the reader is reminded to reflect on the power behind this sort of change. Beyond living it up, you’ll also now be running a more efficient operation and simultaneously inching the profit percentage upward while trimming costs, creating an ever healthier margin. Ah, the crane-like balance you will have achieved. Do it knowing Mr. Michalowicz – and even Mr. Miyagi – would be so proud.