Book Report – That Will Never Work by Marc Randolph 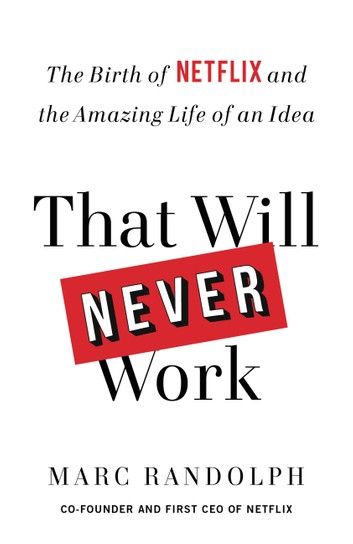 Among many anecdotes shared by Netflix co-founder Marc Randolph in his memoir That Will Never Work, two in particular stand out. In one, he acknowledges “we weren’t changing the world” and it’s this level of grounded candor that makes the book enjoyable. Altering how folks consume movies is meaningful, yet mercifully the former Netflix executive doesn’t overstate the mission as if they were curing cancer. He also believes “nobody knows anything” and therein lies the tale of the typical start-up, where in the early days everyone stabs in the dark maze. For many years CEO Reed Hastings has claimed it was a high late fee he was forced to pay on a tape rental that launched the company, but as the book makes clear that’s an oversimplified quip, the sort of Die Hard on a bus pitch that get romanticized in – and by – Hollywood. Truth is, the pair and their early hires stumbled around for months with several dud e-commerce ideas, even thinking they might ship VHS rentals in the nascent days of DVD. Yeah, no.

Alongside fun trivia – the beta name Kibble, Amazon’s late 90’s verbal acquisition offer, a discarded market test that helped shape Redbox – are key lessons in dedicated teamwork. A successful startup requires committed staffers willing to live on too much pizza and too little sleep and Randolph’s energy pulses through the page when reflecting on just what it took to open what internally they called The Store. He dedicates a chapter to launch day, the detail vivid more than two decades later. Randolph skillfully takes the reader through an exciting first 15 minutes, with bells ringing, high-fiving… and servers crashing. It’s quite the reminder how much has changed in a mere generation when picturing the tech guys racing to an electronics store multiple times, loading a rusty pick-up with as many computers as would fit. One has to treat disasters as opportunities and problems as worthy challenges and the author makes plain that it was the early days of the unknown that were his favorite. “The company is small enough that everyone in it has to wear multiple hats,” he recalls, “but big enough where you never have to wear one that doesn’t fit properly.”

The dire need for additional funding revealed a crucial question: was the fearless executive the proper CEO for a growing Netflix? According to his co-founder Hastings, the answer was a clear no. Credit Randolph’s appetite for vulnerability that the awkward conversations are included herein, complete with cringey details from the PowerPoint presentation Hastings created to slide by slide tell his friend that a demotion was in the offing. Gino Wickman fans know successful companies require a Visionary and an Integrator and Randolph was ticketed for the latter role, Hastings being the better fit to provide the “bold stroke of dramatic, intuitive, confident leadership” lest the business fail. The author hung in there a few more years, through the non-starter M&A talks with then-flush Blockbuster and eventual Netflix IPO, and then he was gone. In the decade-plus since, Randolph has kept busy with other ventures and has mentored countless entrepreneurs, likely all the while pondering the endgame of the resultant streaming wars. What becomes of his lil’ startup with a current market cap of $150B, albeit an entity that loses money? Perhaps that’ll be tech’s feature presentation.