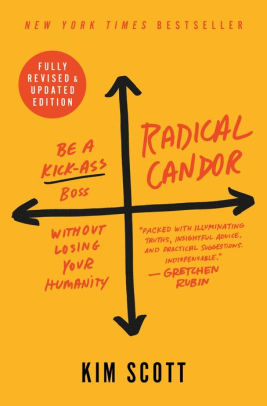 “There are two dimensions to good guidance,” writes Kim Scott in her New York Times Bestseller Radical Candor, “care personally and challenge directly.” Doing both at once accomplishes the titular management practice that became all the rage a couple years ago and for good reason – it’s the perfect book for managers looking to build trust with direct reports, complete with a how-to handbook. It’s worth the distinction to get the updated & revised edition and not just for the afterword and bonus chapter; in the latest version, Scott makes certain to correct misgivings on what it means to be radically candid, smartly employing the ribbing the concept took on an episode of HBO’s hilarious Silicon Valley. It’s no slam dunk when core terms in your business book include “ruinous empathy” and “manipulative insincerity,” so good on Scott for the mea culpa regarding misinterpretations and confusion.

Whatever it is you call yourself – boss (Scott’s preferred term), manager (bureaucrat?), or leader (bullshit artist?) – the author & consultant admonishes us to balance praise and criticism while being sincere regardless. And if you want to improve how you give feedback, it starts with being more open to receiving it. “Ask for criticism before giving it,” she writes, reflecting on Toyota’s assembly-line floor practice of directing employees at the end of their first week to offer three opinions on how the car maker could improve. She got crickets when using this method the first time, finally crow-barring “better breakroom tea” out of some schmo, but that of course isn’t the point. That she used it to instill a culture of two-way feedback in her stints at Google and Apple is what makes Scott a credible source. When staffers learn to critique the boss, they’re that much better prepared for coaching through what herein is termed impromptu guidance. Among many helpful tips, perhaps the best is believing you can deliver meaningful advice between meetings “in less time than it would take you to schedule the subsequent meeting,” further concluding that “the quality of your guidance will be much better.” Amen, sister.

And when this fails? Fire ’em. If as Scott says “Peggy” (not her real name… or is it – who’s to say, really?) proves to be a flat-out horrible performer, you must make her available to the marketplace. Just be sure to use the book’s handy three-point checklist beforehand: you’ve already given her radically candid guidance; determined the team is being negatively affected; and gotten a second opinion on the matter from a trusted source. In sum, if you’ve challenged Peggy directly, shown that you care personally, noticed that her co-workers are annoyed as soon as she clocks in, and a colleague has your back, well, it’s over. Think of it this way: when my daughter’s best friend ever knew she wanted to break up with a dude, she’d schedule “it’s time” on her calendar two weeks out. At the sound of the alarm she’d dump him. No muss, no fuss, just a task at hand. She married a great guy this past summer (fun wedding!), so yeah – it works.