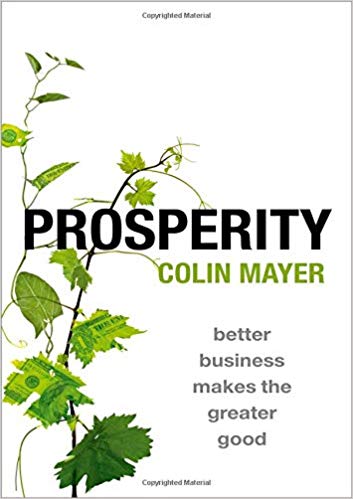 “Money and morals are not natural bedfellows,” writes Colin Mayer in his latest release, Prosperity. The celebrated British economist’s mission is to challenge the axiom that one can do well by doing good because unfortunately it’s well proven how much more can be achieved (read: raked in) by doing bad. While he makes the case in part by informing on the evolution of the corporation from the Roman Empire onward, noting well the disintegrating spirit of being “bound together in office for a common purpose,” Mayer is no Michael Lewis. Where the latter can spin Hollywood gold probing skull-imploding baseball statistics and financial instruments, this author merely instructs… and instructs. Worse yet, he believes “what cannot be said in words is not worth saying.” Yup, there are neither charts nor tables, further making it the four-point font slog it is to get through.

Still, the message is important. It’s no coincidence that living wage stagnation dates back to the early 70’s when economist Milton Friedman first published his infamous doctrine declaring a corporation’s sole social responsibility is to its shareholders. Mainlining rather than simply sipping this Kool-Aid, publicly listed companies allow such sanctioned function (i.e. maximizing profits) to erode if not completely replace existential purpose. According to Mayer, purpose “defines the corporation and everything associated with it – its ownership, governance, leadership, finance, and performance in terms of producing profitable solutions to problems of people and planet.” He expands this notion to include what corporations profess to be and the takedown of typical buzzword bingo is memorable, challenging vague value statements claiming eco-friendliness, community involvement, or workplace diversity. Setting the author’s harangue aside, the reader does come to appreciate his intolerance for empty promises and the lack of board governance considerate of all, including but not limited to shareholders.

Mayer further opines on the law, regulation, and financial policy, key albeit colorless topics. More meaningful are his yearnings for the days of family control when corporations were more commonly run “promoting life through a collective endeavor.” The literal origins of business in Italy stem from sharing bread together; in Sweden, from nourishment for life; in Korea, from causing karma. Whereas such ownership stability remains typical globally, in the US and UK stewardship is less often tethered to founder families rather “at the mercy of institutions whose vision extends little beyond the next dividend payment.” Ouch. Fans of HBO’s hit series Succession will scoff at the notion that characters like the odious Logan Roy and his offspring represent anything outside of greedy swine, but that of course is teleplay fiction. Mayer’s fact-based argument is that with the dissolution of family shareholdings comes that of corporate values at the expense of future generations. If not politics, perhaps such debates will prove worthy exploring with your extended family this holiday season. Ho ho ho boy.