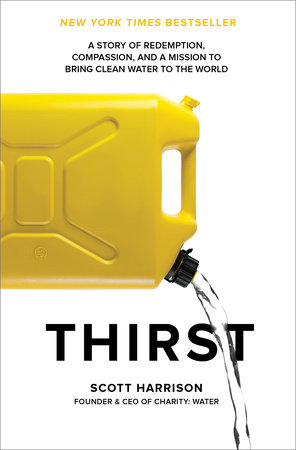 Scott Harrison’s 2018 bestseller Thirst revolves around struggle. The struggle for belief, purpose, acceptance, trust. Having built a rock star-like career as a New York City nightclub promoter – picture the goodfella of velvet ropes and bottle service – Harrison was nudged into exploring the possibilities of offering up his time and talents to charitable causes, a path that led him on enough trips to African nations to conclude his true calling was to unearth clean water for its citizens. The book takes us on medical ships and dangerous journeys, revealing heartbreaking discoveries as well as inspiring tales of grit and determination, ultimately leading to the formation of charity: water. Over 300+ pages and $300M+ raised, it’s plain to see how to make a difference for countless people, one donation – and dig – at a time.

Harrison reveals how challenging it can be to be accepted as a full-time volunteer. Once he’d gotten religion (a literal and figurative transformation) and decided to make a radical career change, applications were rejected out of hand by organizations that avoid “the emotionally adrift” and those who “end up becoming a distraction for the crew.” Harrison did manage to talk his way onto Mercy Ships as its photographer but not before being scrutinized by those experienced enough to be wary of some party boy on a reformation tour. It was over multiple excursions that he shaped a sort of serenity now mindset, learning the hard way to focus only on that which he – and his colleagues – could control. And in what is perhaps the most meaningful lesson for leaders, Harrison was further mentored to zero in on one thing, in this case that which causes more than half of all illnesses in the developing world: the lack of sanitation caused in large part by dirty water. Leveraging his massive email database from the days of hyping events, he blasted messages tied to aggressive fundraising goals, the inevitable unsubscribes and off-put replies be damned.

It’s these descriptions of such unwavering commitment that stand out among the book’s most memorable segments. Note that it’s not perfect, delving far deeper than needed into the author’s courtship of and marriage to early hire Viktoria Harrison (née Alexeeva, later credited as co-founder). This reader came for the charity, not chastity, and didn’t give a, um, darn that they “saved” themselves until the wedding night (ew). That aside, Harrison inspires and is so dialed into the cause that he’s willed himself into becoming an effective CEO, including investing in a tough executive coach who doesn’t suffer fools gladly, berating lack of discipline, micromanagement, and myopia. Confessing that to the team he’s known for being “notoriously impatient, prone to distraction, and a fidgety nail-biter,” he’s self-aware and a slave to continuous improvement. Take note: if one of your goals for the New Year is to branch out into more purposeful activities while cultivating leadership skills, this book should find its way to the top of your nightstand pile. Just add water.

I will buy this book because I work for water suppliers.

Hope you find it as valuable as I did, John. Amazing story. Thanks!

Always appreciate your reviews! Inspires me to read more, learn more, do more, be more.

Right back at you, Julie. Can think of no more important work these days than closing equity gaps and integrating today’s workforce and education. Inspiring indeed – thanks!