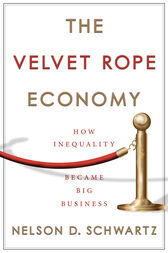 Growing up as I did – big family, big house, big neighborhood – there was plenty of chaos yet no clearer rule: you cut, I choose. When we’d tussle over that king-sized Charleston Chew, no one could argue the core fairness of one of us dividing said Chew and the other picking first, ensuring a perfectly divided Chew. Kids could also agree on a different sort of cutting, as in the line – you didn’t do it, period. Today, slithering to the front is not only sanctioned but celebrated by those with enough dough to pull it off. New York Times business reporter Nelson D. Schwartz takes us inside the world of stage door access and gaping inequality in The Velvet Rope Economy, through which the reader is enlightened as to just how much has changed in recent decades. Walt Disney disallowed such options in his parks, thinking the happiest place on earth should promote respectful, equal treatment of all (a memo he somehow forgot to share with his bullpen of racist animators, but that’s another matter). As Schwartz writes, “financial realities in the form of corporate raiders, impatient investors, and demanding Wall Street analysts have gradually eroded the founder’s egalitarian vision.” Hey, it’s a small world of elitists after all.

In addition to theme park queues, the book examines the travel & leisure industry, exposing how “stoking envy” became big business catering to those who don’t just want to keep up with the Joneses, they’d just as soon humiliate them. There are also grotesque revelations about the impact income inequality has on the inner city with the explosive growth of dollar store chains. Four such outlets open in the US every day, creating food deserts and the withering of what economists call the multiplier effect, whereby quaint locally owned groceries – in addition to providing healthier options and more jobs – would otherwise circulate profits back into their own communities. What we have instead are distant shareholders in Dollar General (and the like) banking on low income families having enough stimulus money to buy $1 tubes of Pringles but not so much that they’d get all uppity and spend it elsewhere on discretionary items. Studies reveal that dollar stores aren’t merely a symptom of economic distress, they’re the cause. You know something’s gone awry when Walmart looks like the folksy five and dime by comparison.

The reader cannot tell which side of the rope Schwartz stands on politically until the book’s conclusion, almost as if he stuffed it in at the 11th hour behind the backs of cautious Doubleday execs with their just-the-facts-ma’am edict. In the end, we learn he’s a bit sickened by tax cuts which exacerbate rising inequality, noting how troubling it is that 40% of Americans make less than $15 an hour and 50% don’t own a single share of stock. Informative as it is, this would be a better book if he threaded its eight chapters with some color commentary. When learning about luxurious bunkers being constructed for obscenely wealthy people who fear “we are one unjustified police shooting away from having riots across the United States,” this reader for one would appreciate an embedded reaction, perhaps something along the lines of how billionaires might recognize that the real problem is appalling social injustice, not limited shape options for the bomb shelter swimming pool. It’s still worth reading. Just know when you crack this one open you’re gonna see dickheads galore on the other side of the rope.