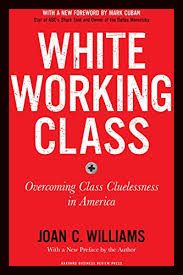 On his first post-Beatles LP, John Lennon paid testimony to the “Working Class Hero,” those he told an interviewer he saw being “processed into the middle classes, or into the machinery.” In 1970, the year his song first hit the airwaves, nine in ten 30-year-olds earned more than their parents at that age; as of 2014, only half did. Over these past five decades, society has witnessed yawning income inequality despite explosive corporate profits and worker resentment has naturally followed suit. The effects of such calamitous economics are captured in Joan C. Williams’ White Working Class, her slim-yet-crucial guide to appreciating Caucasian class stratification. Making no apologies, Williams hammers elitism, perceived snobbery, and the gross misunderstanding of those who are neither rich nor poor, providing a wake-up call to anyone who derides a large swath of the populace as a mere basket of deplorables. At 131 pages, the book doesn’t profess to have all the answers, but there’s not a single throwaway line and it contains at minimum a handful of core concepts that should prove helpful to business leaders.

One timely message in an era of shuttered campuses is to move on already from the default notion that a college degree is necessarily relevant. Up-credentialing, the process by which employers require an undergraduate degree for roles where college-delivered skills are superfluous, has become an unwelcome application qualifier. “It disadvantages working class kids who are smart and diligent but not college grads,” writes Williams, and those who are “do jobs that don’t really require college.” Beginning in the 1950s, students viewed as second class were steered toward vocational education, a platform now largely abolished due to the delusion that all kids should have the so-called best opportunities, namely attending university. Any homeowner in need of a good plumber, or industrialist in search of quality apprentice-like labor, knows all too well the enormous error our society has committed in stigmatizing what are in reality the terrific, lucrative career paths that the mechanically inclined can take, and just don’t.

A mistake that the “professional managerial elite” make is placing an over-weight on the willingness to signal initiative to a group that believes value at work is demonstrated by being stable and dependable and views disruption as a way to wind up canned. If you’re the business owner, your worker bees respect the risk and effort that went into launching the company; if however you’re on the managerial level, Williams admonishes that they may very well loathe you. Water cooler nods and niceties aside, the crew might see a suck-up whose key mission was to smooch enough ass to end up behind that big ol’ desk. And mind your manners; the author cautions that sometimes your attitude “will infuriate them and only widen a societally unhealthy class divide.” If the reader seeks only one takeaway from this sort of publication, gaining clarity on the overall working class mindset is a worthy one in deepening workplace relationships. Short of that, one runs the risk of making assumptions. And as the world’s gym teachers have forever instructed, it’s clear when we assume just what that makes out of you and me.

Why thank you kindly, Janet! Here’s hoping your students might find this sort of info helpful as well. 🙂

You did it again! Thank you for your insightful review.

I always appreciate your support, John. This one is an eye-opener for sure!

Thanks, Chris! Anyone interested in this topic should read (or re-read) Hedrick Smith’s “Rethinking America.” Twenty-five years ago, Smith laid out a prescription for overcoming income inequality in America. One of Smith’s recommendations was widespread apprentice programs for students not heading to college. Widely used in Germany and Japan, apprenticeships help raise the living standards of high school grads. As a nation, we focus too much on college and ignore young people eager to learn valuable skills as mechanics, trades people, etc.

Terrific feedback, David. It seems modern Germany especially is an admirable societal model in more ways than this. Thank you for weighing in with such a thoughtful recommendation!

Thank you Chris, this seems to be another good book that I’ll have to pick up and read in its entirety. Though I may be biased, I have witnessed this for years as each year less young people enter the trades and as a result everyone loses. The kid in the back of the class has just as much chance for success if we keep a path open. Skills that can’t be taught in school are going away because no one is there to keep it alive through apprenticeship training. The loss is one that will be felt in time through all social levels within our country.

Your lips to God’s ears, Ken. Wait… maybe we should put The Big Guy in charge of all high school counseling! On a very serious note, thank you kindly for your sound argument. Amen.