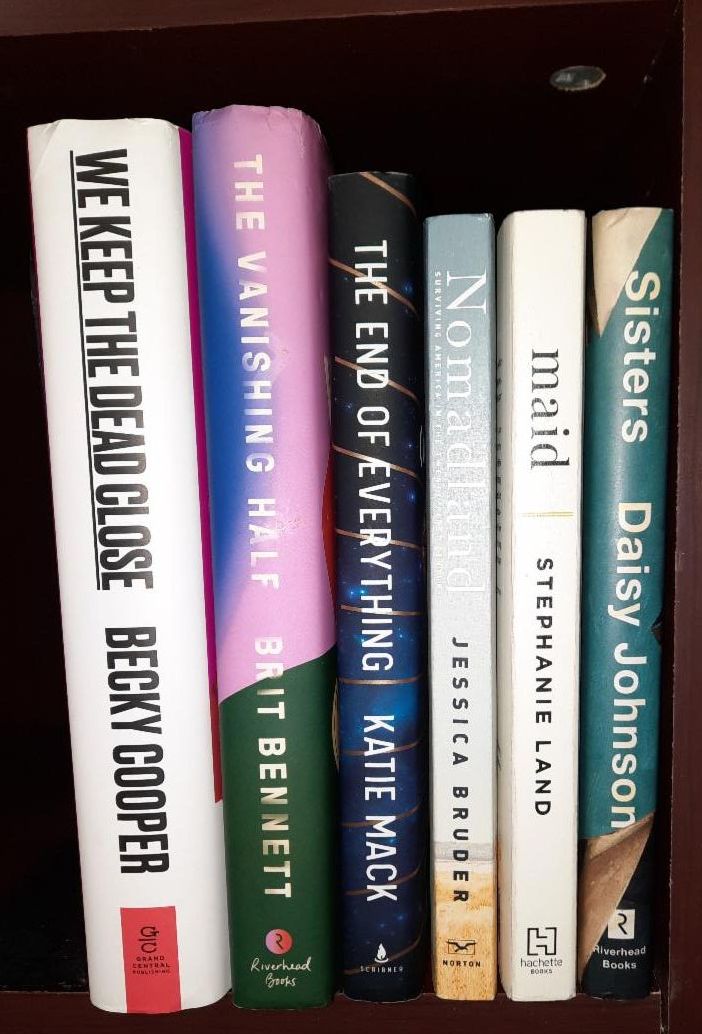 Inquiring minds may wonder why I’ve only selected books by women for this edition of Beach Reads. It’s partly coincidence but largely intentional: with the business-book industry so male dominated, it only seems fair to diversify when possible (humble brag). So here’s goes nothing:

Sisters by Daisy Johnson – Teenaged siblings September and July born – you guessed it – ten months apart while away the hours in the English countryside avoiding their mentally ill widow of a mother. It doesn’t help that one of them is a conniving, evil twit. Johnson writes in style of fellow Brit Sally Rooney but adds creeping dread and a jarring twist to the mix. It’s the most disturbing novel I’ve read in years.

Maid by Stephanie Land – Warning: Only read this one if you’re prepared to tip your housekeeper a good deal more and more often. Land’s memoir of her years yanking hair from shower drains shines unforgiving light on minimum wage realities, yet readers will find themselves rooting for this mother’s better fortune. It’s a triumphant story that’s coming to a small screen near you.

Nomadland by Jessica Bruder – Speaking of optioned rights, I haven’t seen the Best Picture winner based on Bruder’s intrepid reporting and don’t need to (what with my wife always saying, “the book was better”). “Camper Life” gets de-romanticized in the telling of stories of mostly senior citizens trying to make ends meet through menial labor. If you order it, maybe don’t via Amazon, m’kay? #momandpop

The End of Everything (Astrophysically Speaking) by Katie Mack – The title says it all. What’s surprising about Dr. Mack’s book on the ultimate existential crisis is how funny it is. Perhaps only twisted souls chortle over the five possible ways our universe will ultimately perish, but c’mon: we’ve got like a couple hundred million years to go before Heat Death (the most likely end, but it won’t actually be hot – it’s complicated), so lighten up already and enjoy it poolside.

The Vanishing Half by Brit Bennett – This one is far weightier yet no less enjoyable. Bennett unspools the complicated history of Stella & Desiree, identical twins who diverge on separate paths using different racial identities. It spans decades and crisscrosses the US, the tension rising as their daughters’ lives eventually intersect. This is the perfect beach read for those full up on the puddle-deep James Patterson.

We Keep the Dead Close by Becky Cooper – Best for last: this reading experience is every bit as immersive as was Tara Westover’s Educated and yet far more complex. Cooper returns to Harvard on a mission to solve a beyond-cold case of the gruesome murder of an anthropology grad student. Ignoring the rule that the journalist doesn’t become the story, she uncorked this doorstop (440 pages) that may just require a second week to finish. Worth it.