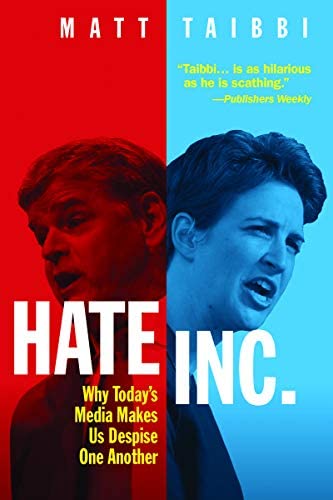 Matt Taibbi always wanted to be a reporter, largely because he worshipped his father Mike whom Bostonians may recall from the halcyon days of WCVB-TV (or, fine, his lil’ Edward R. Murrow Award). Other than whooping it up as a contributing editor for Rolling Stone, the younger man seems to bemoan his career choice in light of what’s become of the industry over the past quarter-century. His alarming diatribe Hate Inc. takes us through the erosion of the news business, mainly due – spoiler! – to the rise of cable TV and the constant bombardment of fear and mistrust. “It boggles my mind,” he writes, “that people think they’re practicing real political advocacy by watching major corporate TV, be it Fox, MSNBC, or CNN.” The news is merely a consumer product and the empty suits have but one goal: hook the audience on anger. The deeper we suck the scrawl into our lungs, only exhaling long enough to shop during the commercials, the stronger the business model. He confesses, “We know we’re training you to unmoor yourself from reality and adopt self-destructive habits.” Jesus Christ.

It didn’t used – or need – to be this way. We’re reminded, “The news was once a placid ritual designed to amp down the viewer’s political reflex.” In the 70’s & 80’s – just picture Ron Burgundy lampooning this very concept – breaking news was the birth of a panda if not a cat stuck in a tree. Not so today. “We are trying to keep your brain locked in conflict,” admits the author who clearly loves the high art of great reporting yet loathes what’s become of the craft (and obviously isn’t distancing himself from the morass). At issue is the recent-decades’ pattern of consolidation resulting in the appointments of station directors and publishers who lack background as reporters. With a deadeye focus on quarterly results, foreign offices get shuttered leading to the overreliance on wire services and disdain for long-form (read: costly) investigative journalism. Those who climb the ladder in media conglomerates today are likely to be “the credulous, the intellectually unadventurous, and the obedient” that placate bloodless corporate clients. In a word, it’s gross.

And go figure, the book’s damned funny too. Aside from disturbing reveals like the so-called unworthy targets principle, stovepiping, and Roger Ailes’ contemptuous 55-to-dead target marketing, there are genuine guffaws throughout. Taibbi tells us that the press is “as commercial as selling cheeseburgers or underpants,” that during the 2000 presidential election voters “decided they’d rather have a beer with a recovering alcoholic than Al Gore,” that in the Russiagate era “once ‘reputable’ outlets are now only about as right as politicians, which is to say barely ever, and then only by accident,” and concludes that when we’re exposed to too much cable TV – and it matters not a whit if it’s Carlson or Maddow, Hannity or Todd, ‘cuz they’re all slinging Oxy and ad space – “the brain atrophies, and you’ll soon find yourself unable to handle unorthodox thoughts.” Having absorbed these nearly 300 pages, I’ve now adopted Taibbi’s self-described trick: before clicking on a news outlet’s link, I imagine it stamped on a box of Camels. Sneaking just one, rationalizing that maybe each drag isn’t all that harmful. Then again, maybe it is.